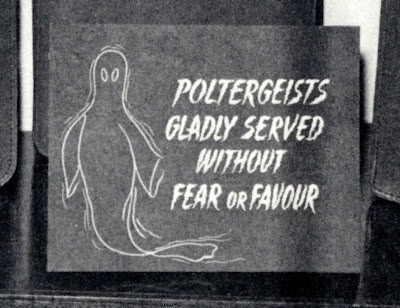 Well the talk at the Sportsman's Arms last week was a bit of a washout but I did learn a couple of new, interesting stories.
Londoner Peter Young told us about a flat he was helping to do up some years ago in Chelsea. A couple of burly builders got completely spooked in there, so Peter agreed to join them. Apparently, there was a remarkable amount of activity, most of it centring round the drinks cabinet, which kept opening of its own accord. I can't remember all the details but I recall whisky apparently being drunk by an unseen entity - is that spirit cannibalism?
There was a lot of mysterious noises, glimpsed shadowy figures and - a rather Gothic image this - a swinging chandelier. Needless to say, they finished up as quick as they could and got out of there.
The story Peter learnt later was that a man had killed his lover there in a drunken rage, and he also heard of similar activity in the next-door flat, which at one time had been part of the same suite of rooms.
The second story I heard was about a local pub, one I've written about before. I'll save that for next week.
Posted by Funcanny at 05:11

Funcanny
Mold, Flintshire, United Kingdom
I am the editor of a website devoted to ghosts and folklore in Britain, Uncanny UK. I am the former editor of 'Paranormal Magazine' and I have written five books, including 'Haunted Wales', which is to be republished by the History Press in 2011.